I love Jack Black.  He seems so shameless.  So real.  So genuine, hilarious, sweaty and cuddly.  When I found out that my friend, Robyn, from Life By Chocolate KNEW Jack Black when he was much, much younger, I was in awe.  "You knew Jack Black?"  I never looked at Robyn the same ever again.  SHE KNEW JACK BLACK.  I still look at Robyn as a really talented, funny, honest and engaging writer, but...now I see her more as a mythical creature.  That is why I am so excited and humbled that Robyn is sharing her first-hand perspective of the star of KUNG FU PANDA 2 today in The Break Room.

Though I was never much of a camper, I grew up gazing at the stars. If you’re from or have ever visited LA, you know that the only stars you see there are famous people and Milli Vanilli. It wasn’t uncommon to spy actors from General Hospital or Gimme a Break on a routine outing to the movies or semi-upscale eatery. In fact, my dad used to pass drugs to the stars. Yep, Cher, Steven Siegal and other celebrities paid dad for their drugs. This all went down in Malibu at Thrifty Drugstore. [Dad was a pharmacist, now retired.] This is all to say it’s not too surprising that Jack Black went to Temple school with me and my siblings – especially since his fame wouldn't hit for decades down the road.

The Engel kids and Jack Black (and a few others not worth mentioning) attended Temple Jeremiah in Westchester (a little suburb of Los Angeles and home of the LA Airport), CA. Sadly, Temple Jeremiah closed for financial reasons years later. Jack’s mother attended a final function there along with my dad and his then girlfriend.

I should backup and state that Jack Black is the man’s real name, not a stage name. I made fun of him for it. I’m deeply ashamed. I really was and am a nice person but his name made me bust a gut. “Jack Black can eat no fat! Jack Black can eat no fat!” I’d spout off. I was quite proud of this insulting teaser I’d clearly stolen from a well known children’s nursery rhyme, though my siblings were my only audience. I never directly poked fun of him and hopefully he’s not reading this post.

Jack was blond, small in stature, and dressed shabbily, as did his mother. I felt sorry for them, as it seemed his family was hard pressed financially. I believe I knew back then that Jack’s parents divorced. In the 70’s, this was a big deal.

One day, Jack’s mom failed to pick Jack up on time from Temple school. Jack and my brother, Jonathan, were about 5 years old at the time. Mom kindly offered Jack a ride home. She was generous like that. So Jack sat in the middle seat of our red and white striped Rebel station wagon. It was a quiet trip but one I remember vividly. Perhaps I knew I should.

I sat in the very back of the wagon, with Jack just inches from me in the middle seat. He didn’t say anything except “Thank you” upon arrival. We were all shy kids. I don’t think I ever spoke to him. In retrospect, of course, I wish I’d proposed marriage. I was only 7 or 8 and wasn’t quite thinking down those lines yet.

Jack really was a warmhearted, quirky and creative kid. Jonathan recalls a day when Jack sneakily meandered the Temple playground, hiding pieces of candy in various spots for other kids to find and enjoy.

If you are reading this, Jack: Eat all the fat you want! It suits you well. We all love you. PS Can you get Jonathan a role in something? My mom gave you a ride home from Temple Jeremiah once.

You can find Robyn's blog here and the articles she writes for The Examiner on Dating, Sex & Relationships here, including her hilarious recap of a horrendous blind date.  I was cringing and laughing at the same time! 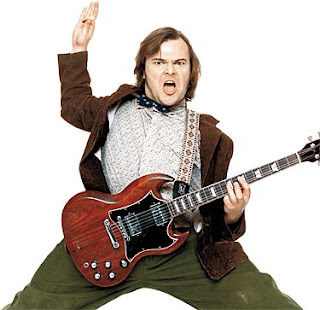 The idea for this post came to me when I decided to promote the latest Juice In The City deal for music lessons with Bach to Rock Music Lessons located in Sugar Land, Texas (the Southwest Freeway at the Grand Parkway).  The clever name for this place reminded me of Jack Black in his movie School of Rock.  Professional lessons are offered for students of all ages in piano, guitar, voice, drums, violin and more.  Apparently, knowledge of music is tied to improvements in math, science, writing, history and beyond.  For only $65 (regular price: $130), you get FOUR half-hour music lessons.  I LOVE that idea!  Four lessons would be just enough to know if more are desired, I think.  If you are interested in this fun deal, click HERE.
Email Post