If you are not subscribed to Point Counter Point Point Point, you have to subscribe now. I really don't think there is any choice here. These guys, Pat and Christian, are so, so funny! I laugh out loud EVERY TIME I read their posts. You will see in a minute when you read what they have to say about IKEA below. (Sidenote: I love the IKEA commercials on the radio here in Houston because the Swedish lady says "IKEA Ooostone"). Basically, these guys post their conversations. It's like you're in a booth at Chili's and they're in the booth behind you and you can hear their every word because they talk so loud. It's free entertainment!  You'll see what I mean in the post titled....


Before we start we would first like to give a big thank you to Kelley for letting us do a guest post here at Kelley’s Break Room. To show our appreciation we’ve sent you two Orange Juliuses that we purchased from our local Orange Julius emporium. We didn’t know your mailing address so we just addressed the package to Kelley in Texas. Hopefully you’ll be getting it soon. OK let’s start this thing.

When I head to Pet Smart to get cat food and such I usually tell the kids that we are going to the zoo. There’s a variety of animals there so it’s hard to argue that it’s not a zoo. Similarly, when we head to IKEA I tell them we are going to Europe. It helps that our local IKEA is located right next to the airport so it adds to the illusion that we are really traveling somewhere.

I kind of have a love-hate relationship with IKEA. I like going there but I don’t like the crowds. But I do like their meatballs with that sauce made out of lingonberries, which I’m assuming is something IKEA invented in their IKEA labs. I mean who has ever heard of a lingonberry? Totally sounds made up.

Most IKEAs can be seen from space.
(source)

But I also think there is a fine art to shopping there.The trick is to avoid the stuff that is too IKEA looking and make sure you don’t put too much IKEA furniture in one room. You need to mix it with furniture from other places so the IKEA-ness of the IKEA doesn’t stand out. The last thing you want is for people to enter your house and say “Oh hey that’s from IKEA!” If this has happened to you then you have totally failed.

Pat, what are your feelings about IKEA?

Pat: Similar to my feelings about Trader Joe’s. I went to a friend’s house for dinner once, and identified every ingredient in the meal by the aisle on which it can be found. And then I made some quip like, “It’s a Trader Joe’s world, and we all just try to put our own spin on it. Hard to be unique, I guess”.

I think that was the last time I was invited over.

But I still shop at Trader Joe’s, because I still LIKE Trader Joe’s. And I shop at IKEA because I LIKE IKEA. But yeah, I get a bit embarrassed when people so easily identify our unique Scandinavian furniture and housewares.

And I am totally with you on the lingonberries. They make a really great sweet-savory-salty-umami combo when mixed with that brown gravy stuff.

Christian: Interesting similarities with your Trader Joe’s example. I guess it’s a good thing I get all my cooking ingredients at 7-11. No one has ever identified the ground up 7-11 sausage-fried pepperoni corn dogs I put in my famous veggie-lasagna.

So we are in agreement that we like IKEA furniture but in limited doses. But what about actually shopping there?

I once went to the IKEA in Seattle on Christmas-eve so I pretty much know what the Vietnam war was like. But on rare occasions I have found myself there with hardly any other people and the experience could almost be described as pleasant.

Pat: Oh, don’t get me wrong, or misquote me. I didn’t say anything about the furniture at IKEA (my spouse is the furniture-getter in our family). I just like to go there. Y’know, look at people. Eat some stuff. Generally hang out.

Do you go there to actually buy stuff to take home?

Christian: Well, actually yes I do. I think that’s kind of the purpose of the store.

But yes I agree it’s a great place to hang out. Especially if you strictly hang out in the display areas. It’s like being at a house party at a huge house that has lots of tiny little rooms with a severely out of whack bedroom to bathroom ratio. Granted there often seems to be way too many people at the party but that’s pretty much true for any great party.

Which reminds me, IKEA could really use a bar.

What would be better than heading over to IKEA for an after work drink? Order a scotch and kick back on one of the numerous Ektorps (couches), put your feet up on a Boksel (coffee table) and stare at a fake plastic TV (fake plastic TV). I like to create my own fun so anytime someone asks me if I have any questions I respond with “Shhh, I’m trying to watch this.”

They should also make it adults only. I mean definitely keep the kid care area - I don’t want to have to pay for a babysitter - but make it mandatory and allow no one under 21 past the entryway.

And to prevent it from getting too crowded we’ll need a bouncer at the front that makes sure only a limited number of people will be in the store at any given time.

Don’t you think that would make for a much more pleasant furniture shopping experience?

Pat: Yes! I usually do my drinking BEFORE I venture to IKEA--it helps take the edge off, and, coincidentally, I find it easier to understand the assembly instructions when I’m a little toasted--but the thought of all those fake display bottles actually being filled with something makes me want to shop more often. 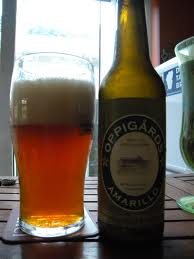 With meatballs? And some shelves? Hmm?
(source)

Did you ever hear that story by that guy? There was a dude who, for a radio story and with the permission of his local IKEA store (and I assume the IKEA mothership), lived in an IKEA for a month. That sounds AWESOME! Imagine if all of those rooms weren’t just on display, but were actually YOUR HOUSE?!?!?

I might try to do that, only without asking. Just hide in one of the features ‘til after closing. You want in?

Christian: I’m in. I’ll meet you in the kok avsnitt (kitchen section). I’ll be hiding in one of the stora skap (large cabinets) dressed som en stor morot (as a large carrot). Wait sec. Dressed as a large carrot? That was supposed to say dressed in dark clothing. Damn that internet translator!