My "Air Supply" Mission (And it's not to find out if they still use a round brush.)


"Think you would want one of these bath mats?"

"Hey, what do you think of this wall decal?"

"Like one of these rugs for the living room?"

"Want to eat at [same restaurant I mentioned above] again tonight? I have a couple more Groupons left and by 'couple' I mean 800."


I know the Groupons by now. They are usually the same businesses, or type of businesses, popping up. But, every now and then, a REALLY good Groupon shows its face and makes your entire day.

This Groupon was the day maker yesterday: 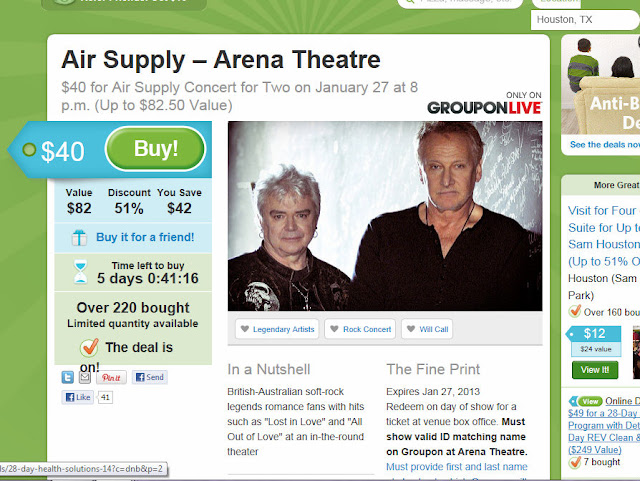 (I actually did a double-take with the guy on the left to make sure Estelle Getty hadn't come back to life.)


You can't fault the guys for still touring. I mean, they have to make a living. And people still love their music. Obviously. (Well, okay, maybe they're not selling out stadiums anymore. See: GROUPON.)

(A refresher video for those not familiar with these very, very awesome dudes. This has subtitles in Spanish for those of you who don't understand English.)

Russell Hitchcock is Sophia up there in the blue sweater and glasses. He is 63. The guy on the right is Graham Russell and he is 62. (Alternate band name: The Russells.)

It's not like the guys are old. They're my parents' age. Their timeless music brings me back to my childhood. I love their songs BIG TIME. So, you can imagine my surprise when I saw the new line-up for their concert. They've change their songs up a bit.

See what I mean?

Lost In Lowe's
Lost in Love


I'm All Out of Life
I'm all out of love


It's like they've thrown in the towel or something. Personally, I'd go to their concert, hold my bright white phone screen up high, sway like nobody's business and belt those tunes out- lyrics changed or not. But, even IF they are on Groupon and singing in smaller venues and getting a little older, I don't think it means they're lyrics have to change.

Hey, the bright side is that I think Air Supply may actually consider singing in the Break Room one day since smaller venues look like their new thing. We could use a little music up in here, don't you think?  People are starting to complain about my miming shows that I put on at lunchtime and they absolutely HATE my accordion solos, too. 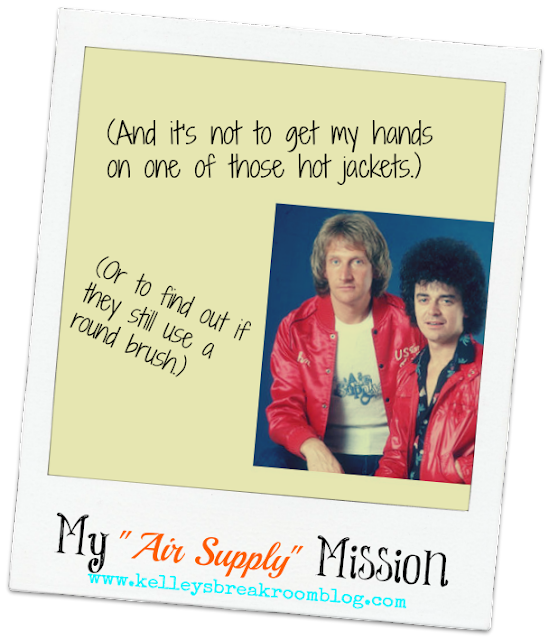 No, I'm on a mission to get Air Supply to show their faces here. Before I blow up their Twitter account that they haven't used in over 689 days with my repeated requests, I am first going to see if I can get one more chair up there at the top and will work on re-stocking the vending machine with something besides Coke, too. Don't want The Russells giving me snooty looks.

(One other thing I am going to do before the debut is beef up security. I'm afraid Air Supply might have a breakdown after singing "Even The Nights Are Better/Wetter" for the 5,213,216,743,723th time in their lives like I had over those blasted green beans.)
Email Post