I have some exciting news to share with you.

That's the short version of the story. 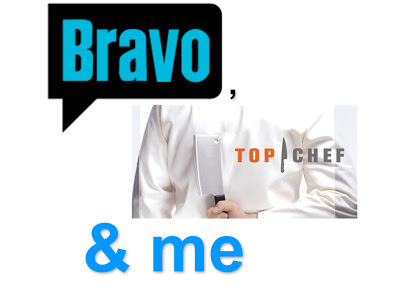 The long version (not too long- easy on the keyboard) is that a few weeks ago Bravo TV contacted me to ask if I wanted to be a part of a team of bloggers that will be recapping and reviewing Top Chef- Seattle, as well as engaging others in social media surrounding the show AND giving away Top Chef-Seattle swag to those that choose to hang out in the Break Room from time to time. You know I said yes! Well, I said "yes" a few weeks later because I missed the initial e-mail.

The good thing is, they're only 6 shows in now, so I haven't missed too much. I went on a Top Chef-Seattle binge last night and now I'm all caught up.

But, I have a confession to make.

I have never watched Top Chef before.


(I take that back. I DID watch a few scenes at the gym once while I was on the treadmill.)

I'm hooked now. I love it. How could this have been on for TEN seasons and I haven't watched every single show? Parts of it remind me of The Apprentice, which I also love.

My sister is ALL about Bravo. She said that if all the channels were taken off her TV and she could only choose one to keep, it would be Bravo. She also loves Top Chef and is a major foodie.

One of my favorite dishes to make is Upside Down Pizza, which involves 6 ingredients, two of which are powdered spaghetti sauce and Pillsbury crescent rolls from the refrigerated aisle.

More proof that I'm not a foodie? One of my most read posts of this blog is about a cupcake class I took that involved some REALLY awful looking cupcakes I made, including one I called the D-CUPcake. It actually won the prize at the end, but I'm thinking that had nothing to do with how pretty I made it.

I like to eat and I like to cook, but I don't get all bent out of shape like those Top Chef judges do if the garlic does this when it is supposed to do that. (I do get a little ticked if my noodles don't come out, ahem, al dente, I have to say.) Thankfully, Bravo doesn't require that I be a foodie. I will try to make and share some of their recipes from time to time. I can just tell by looking at some of you that you care about your recipes and your cardamom and your nutmeg and your Old Spice.

Next week, I will recap and toss in my nonsense along the way. Today I just wanted to let you know why you'll be seeing Top Chef posts from me. I will either have my post up on Wednesday nights right after the show or I will have it up the very next day. I'd love for you to jump in with your thoughts, too!

Though this isn't a recap like you can expect to start seeing next week, I do have a few comments:

Check back next week so we can dish on the dishes!

I'm required to disclose a relationship between Kelley's Break Room and Bravo. This could include Bravo providing me w/content, product, access or other forms of payment.