I think I've lost it.  I've written a story about a porcupine.  A porcupine.  A pregnant porcupine even.  Blame it on my husband.  We started talking about painful things and it came up that nothing would be as painful as a porcupine giving birth to another porcupine.  It was late.  I had some leftover sangria from Thanksgiving...also some Moscato...and I wrote this story. 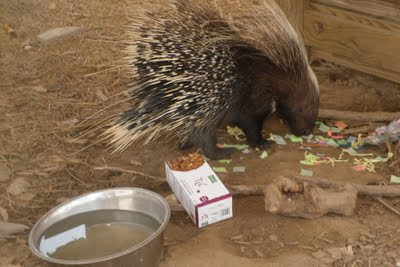 It was 5 a.m. on a cold winter day and Paula Porcupine could feel her baby (or was it babies??) kicking inside her.  Paula was only 9 months old herself.  When she told her mother she was pregnant, her mom looked at her in shock.  "You haven't even started preschool yet!  You still have a Diaper Genie in your room!  This is ridiculous!  I thought you were playing with blocks and you were out with a BOY?!  Wait until I tell your father!"

Paula remembers crying and crying over the volatile conversation with her mother, Peggy.  She knew she was right.  Her mom had actually read "Goodnight Moon" to her the night she snuck out and met Pablo Porcupino.  She didn't feel quite ready to have a baby since she was still in diapers herself.  She also was still extremely challenged by her stacking rings set and sort-the-shapes box and was convinced that mothers had these types of things mastered.  It didn't matter.  The porcupettes, the name given to baby porcupines, were coming.

And all they ate was corn.  Here is a video Paula eating her corn below.  Ignore the fact that the human owner keeps calling her "Teddy", when clearly this is Paula at her porcupette shower.  Humans can be so stupid.  For real.  Listen closely to Paula talking.  Her favorite words are "ighighighigh" and "SCHWANKA!!!", which means "I wish you would have bought cupcakes.  Who throws a porcupette shower and serves CORN?!"


(Thanks to Abby Has Issues for sending me this video!!)

As Paula prepared her little nesting area for the porcupette that was conceived only 4 months ago and was due any day now, she worried about the pain factor.  "I am going to shoot a baby with quills out of me?  Am I insane??"  Her mother would remind her incessantly that mother porcupines had been having porcupettes for CENTURIES without a problem- even without an epidural!  She cried and cried at the thought of it all.  Thankfully, her now-husband, Pablo, would pat her prickly back while offering a "Now, now..." at just the right moment.  He wasn't really very smart, but he really could "now, now" a girl like a pro.  A real pro "now, now"er.


The other thing that stressed the little 9-month-old mother-to-be was what she would name the porcupettes.  Since she lived far away from a real hospital, she had no ultrasounds to let her know whether she'd be having one or two or three porcupettes.  She also didn't know if they would be male or female.  Thankfully, all the leaves she was given at her porcupette shower were green.  Green was a neutral color, right?  Not knowing what she was going to have and if they'd be boys or girls did not help Paula pick out names easily.  One thing she knew was that she couldn't veer from the "P" names, as that's all porcupines ever used.  When she mentioned "Quill, Quillie and Quilla" to her mother, her mother almost backed her spikey butt right into Paula, since, as she learned when she was much, much younger (a couple of months ago), porcupines don't actually shoot quills.  "You want to begin your kids' names with Q????  Q?????  Who do you think you are???  May I remind you that you are not even a year old?!  What do you know about naming babies?  I've had tons!  I know!  PORCUPINES ONLY USE 'P'!!!!"

So, Paula reluctantly settled on Pete, Pot and Pat.  Poor Pot.  She knew it was a stupid name, but she could think of nothing else.  At least it was better than Pits, the fourth name she had on her list.

Just before Paula was to deliver her three children, she began crying over the pain she knew she would endure.  She grabbed her face in her paws and wailed.   "I'm spikey!  They'll be spikey!  I'm gonna diiiiiiiiiiiiiie!!!"

But, much to her delight, she delivered this: