Lately, I've been debating whether or not we should introduce an instrument to our boys.  Something for them to hit besides the top of each other's heads. My oldest has expressed an interest in playing the drums.  The thing is, we don't have a drum set in our front room.  We have a piano.  Maybe one of them can learn to play the piano like Justin Timberlake or Chris Martin from Coldplay, only I would see to it that my son didn't rock back and forth like a hungry pigeon like Mr. Martin.

The problem is, if we gave the boys any kind of music lessons, they'd probably end up like me.
﻿

My grandmother bought me a piano in the mid-80's. I know she had dreams of me playing that piano at her church one day. Most of the leaders in that really small church had wives that played the piano. "YEW GONE BE MAH WIFE, YOU BEST LEARNT TUH PLAY THAT THAR PEEYAINUH!" was probably something those women were told and one time or 'nother. Maybe my grandmother was grooming me to be a preacher's wife. She was grooming me to pound out "Just As I Am" on the upright piano situated to the left of the stage, I just know it.


My mother, on the other hand, had dreams of me learning to play "The Wind Beneath My Wings" by Bette Midler.  I remember at some point that she specifically said if I learned to play that one song for her, she would be satisfied with my piano playing abilities.  She certainly deserved the tribute and still does.

To this day, I have yet to play either song- "Just As I Am" or "The Wind Beneath My Wings". Isn't that almost the saddest thing you've heard all week? Now, don't you curl up in a ball and start crying now. I've got to finish this post. You stick with me and then let your tear ducts go wild.

In the mid-80's, I was diligently attending my piano lessons with a girl a few years older than me.  I always thought she was so pretty and wanted to be just like her, but only be allowed to wear shorts and listen to Phil Collins and Madonna.  She was from my grandmother's church.  She probably knew "Just As I Am" by heart.  We never got to it, though, because we were too busy playing the scalezzzzzzzzzzzz.  Boring.  Bor. Ing. I mean, gollybum (my late uncle used to really say that), I didn't want to play the scales.  Give me some music by The Jets or something, girlfriend!

For some reason, my mom switched piano teachers after a little while.  Maybe it was taking too long to get to "Just As I Am".  I'd like to say it was because my mom wanted to give me a teacher that had lots of Richard Marxx sheet music, but that would be a lie.  She gave me 99-year-old Mrs. Ford.  That lady seemed 99-years-old to me.  I'd sit my behind down on the piano bench and a few years later, Mrs. Ford would lllllloooooooowwwwwwwwwwweeeeeerrrrrrr herself down next to me.  We'd scale the heck out of that piano until I finally had to ask her when I was going to learn something by Journey, for crying out loud.  I mean, it wasn't like I was asking to pound out, "ANY WAY YOU WANT IT, THAT'S THE WAY YOU NEED IT, ANY WAY YOU WANT IT!!!!!"  A little "Faithfully" would've worked just fine.

I can't remember exactly, but I think she told me to faithfully shut my fat mouth.

So, I learned to play songs like this one: 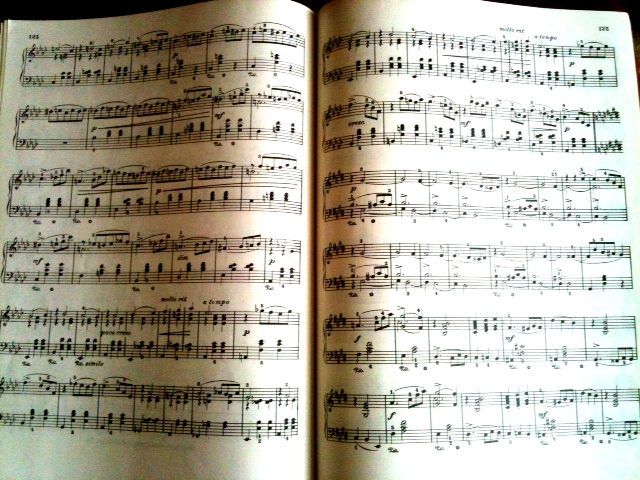 I think that's Fur Elise or something.  I can't remember. I did take the picture, so don't get all CSI on me here in the Break Room or anything, you music lovers out there. Those fancy, classical pieces all start to look the same to me.  There all a bunch of black circles, white circles with tons of lines, squiggles and number signs.  (I know! Sharps!)  I didn't mind playing Fur Elise when it was presented to me, really, because I remembered it from the 1986 McDonald's commercial.  There was at least some small link to the 20th century.  I had started feeling a little dusty always talking to Ludwig v. B.


The words she made up to the song were:


Oh I wish I were already there, instead of here, playing this song

Oh I would have a big chocolate shake, a cheeseburger,

And I would eat the fries myself, and not give any to my dumb brother

Hands off they’re mine all mine

And now I can have my chocolate shake, my cheeseburger,

and also whoops.. and also fries

"Hey, Kelley, play Happy Birthday for your sister on the piano!"

(Cut to me playing "Fur Elise" and my dad giving me a look of bewilderment.)

"Sweetheart!  Play Silent Night.  It's Christmas Eve, after all!"

(Cut to me playing "Fur Elise" and the whole family huddling together sobbing.)

"Hey!  Chopsticks!  Play Chopsticks!  Surely you can play that, right?  Surely?  Please?  We need a little variety around here..."

(Cut to me playing "Fur Elise" while appearing helpless and giving my family a look of sorrow.)


When I wasn't perfecting that song for the billionth time, I was begging my mom to get me some up-to-date sheet music.  I wanted to recognize the music I was playing. I wanted to stop playing Fur Elise already.  I  wanted to sit down and act like I was Kelley Joel or Kelton John or something.

So, my parents bought me this one:


Ohhhhhhhhhhh, yeah.  "AS REAL AS IT MAY SEEE-EEE-EEEEM, it was only in my dreeeeeeeeeeams...."  I never did quite get it down, though.  I labored over the piano keys realizing with each missed key that I wasn't going to be able to hammer away at the keys singing "LA, LA, LA" with a big singing-and-playing-music-together-is-super-easy smile on my face.  So, I set it aside.

My mom didn't want to give up on me just yet, though.  Hoping that some current music may motivate me to stay in the piano playing game, she bought me.. 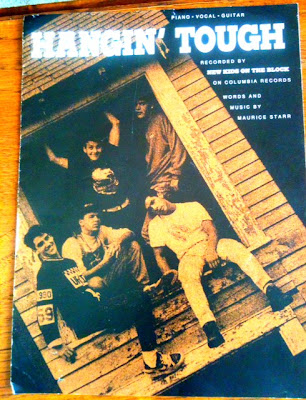 That's right.  HANGIN' TOUGH.  "Ohhh, ohhh,ohhh, OH, OH!  HANGIN' TOUGH!"  Imagine that on the piano.  Imagine me getting down and serious with my pedals and whatnot to play "Hangin' Tough".  Pretty horrible thing to imagine, yes?  Hangin' Tough and a piano don't mix.   Actually, Hangin' Tough and anything don't mix. Still, she bought it for me because she thought it would make me happy.  She thought it might motivate me to keep playing the piano. She knew I loved New Kids on the Block at the time. It was a nice gesture. She was trying.

But, it didn't help.

I gave piano lessons the boot before high school and I sent Mrs. Ford packing.

And now I'm feeling guilty. Writing this post has left me with no other choice. I've got to find the sheet music to "Just As I Am" and "Wind Beneath My Wings" and play it for my mom and grandmother for Mother's Day. Gollybum, where am I going to find THAT?

Don't tell them my plans.

Even if I find both of them, it may just come out sounding like Fur Elise.

The point of this link up is to share a humorous post you have written at any point.  Anna and I SO enjoy laughing at the funny stuff you all link up week after week!  It is so great to see people return and new faces pop up.  Because there is such a wide audience between all of the blogs, keeping the posts PG-13ish is probably best..  If you'd like, put the name of your blog post as your "name" in the linky field so that people will know more about your post.  Also, if you mention it on Twitter, please use the hashtag #findingthefunny. Thank you!

Most Clicked Links from Last Week

#1 - Ellen Degeneres Is A Coward HouseTalkN

#3 - I'm Not Cheating On You, I'm Cheating For You Ninja Mom