The Uncrafty Girl's Guide To A Crafty Valentine's Gift 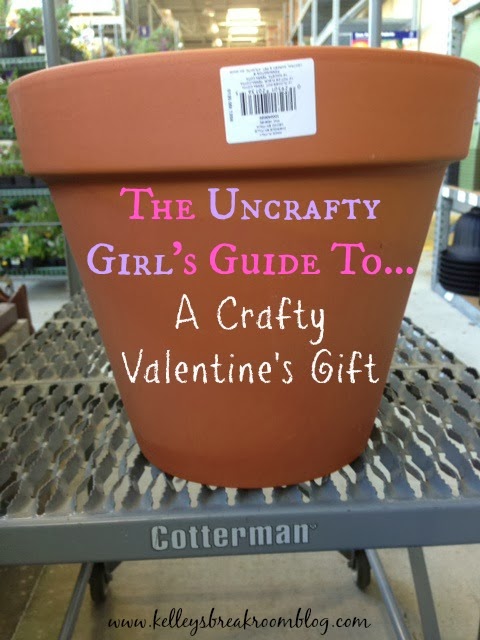 I do not consider myself crafty. If I were crafty, I would always have lots of glue sticks on hand. When I go to use my glue gun, I usually don't know where to find it right away. You can forget about the glue sticks. Crafty people keep up with their glue sticks.

I also don't consider myself patient enough to be considered a "crafty person". I was never a scrapbooker. I like those photo books, but I always have Walgreens or Shutterfly populate the pages. I like to git 'er done, you know I mean?

Every now and then, though, I'll get the urge to do something in the crafty realm. I feel like such an imposter walking through the craft aisle of any store, though. I almost expect *Melba to come around the corner, grab me by the collar and start throwing questions at me.

"What is the difference between knitting and crocheting?!"

"Why would one need pinking shears?!"

"Which tip would you use to frost a cupcake?!"

Before you know it, Melba is heaving me right into the clearance bins right outside of the sliding doors at Michael's.

I risk the Melbas of the world sometimes when I really, really want to make something on my own because a) I can't find it anywhere else or b) it's too dingdang expensive to buy.

This past Christmas, I was at the Nutcracker Market in The Woodlands, which is a northern suburb of Houston. (They'd probably call themselves something different, but whatever.) I saw these really pretty personalized pots to put on your front porch with the letter of your last name and the year that your home was "established" and I wanted one sooooo badly. A friend of mine has something similar on her porch and I always admired it. This girl was busy in one of the booths just painting away on them. When I finally thought, "Yeah...YEAH!! Go spend $75 on that pot!" (I forgot how much it was... I just remember it was a price that my husband would have given me "the look" over.), I walked over to Pot Painter to try to place my order.

She said that they were backed up on orders for the next 2 days and that I could "definitely order one and we could ship it to you". Um, no. I didn't want to pay even more to have the thing shipped to me.

So, I moped a little bit and then got sidetracked by amaretto hot chocolate samples.

When I recovered from the disappointment and the hot chocolate, I called my friend that had the pots on her porch. She was really helpful. (SHE is crafty! Yes, you are, Mollie!) I was initially going to borrow her Cricut machine to get vinyl letters made for the pot, but then she pointed out that the vinyl letters would eventually crack and peel. She had experience with that. She said the best thing to do was to paint them directly on the pot.

She was going to make me stencils with her Cricut machine, but then this and that came up (it was right around Christmas time) and it just didn't work out.

So, I was going to make my own stencils.

I printed out the letters that I wanted to use for mine and for the one that I was making as a gift for my sister. I think I looked at a million fonts.


Now, how was I supposed to cut that out and use it as stencil? I could have gone with a simple block letter, but I didn't want to, my friend. I just didn't want to do that, so I didn't.

I was going to try my hand at freestylin' it.

First, though, I had to buy the pot and the plant and the dirt.

Next, I had to paint the suckers.

If it wasn't for **Loretta at Home Depot, I would have bought regular spray paint. She pointed out that they actually make a spray paint specifically for pots. So, if you are going to do this little uncrafty craft, then look for that special paint.

I sprayed two coats of paint onto each pot and saucer. (Is it called a saucer? It's not like it's a giant terra cotta coffee mug.) It might even work better to hand paint it, but I liked how fast it went with the spray paint. There was some dripping that happened, but I could usually spray paint over that part so it wasn't obvious. If I had a stubborn drip, I just painted over it and stuck his little stubborn face toward the back. Showed him.

The next thing I did was find some ultra special, exquisite and very costly paint brushesjustkidding. I raided my sons' craft box. I think they have used this to water color with in the past.  I then eyed the fonts that I had printed out, dipped these unfancy brushes into some white paint that I picked up from Home Depot and painted the letters and numbers onto the pot.

I did that quite a few times, actually.

The good thing is that, if you don't like how the lettering turned out, you can spray paint over it, rotate the pot a little and start over.


Do I think these pots are perfect? No.

Do I think you could do it a million times better? Yes.

I already declared myself "uncrafty", remember?

The thing is...it was fun to make and it was fun to give. I think it would be a great Valentine's Gift to give to someone. You can obviously be very creative with it. The year that the home was "established" doesn't have to have anything to do with an anniversary date. There doesn't even have to be a date on it or even the first letter of the last name! You could even paint "You better not knock 'cuz I ain't buyin'" on it.

So, that's it. That's the uncrafty girl's guide to a crafty Valentine's gift. I am sort of liking the ring to "The Uncrafty Girl's Guide To..." Maybe I'll try to tackle something crafty-ish again one day.

I know I'm not a craft blog. Thanks for letting me pretend to be one for a second.