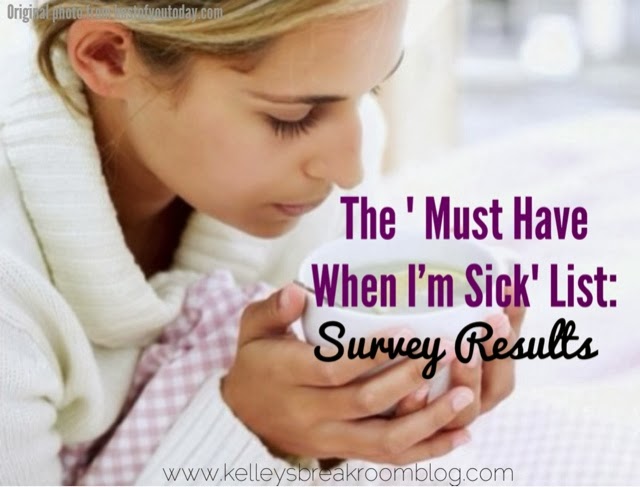 When my kids weren't feeling well recently, I started thinking about what I always wanted my mom to bring to me when I was sick and stayed home a day or two from school. I always thought the list was pretty short when it came to what we eat or drink when we don't feel well. In my mind, there were only 4 things on the list:

Like I often do, I went to the Kelley's Break Room's Facebook page and asked people there what they wanted to have when they weren't feeling well. Reading through the list both inspired me and made me laugh, so I, of course, had to share on my blog! I have actually tried a few of these since that day.


“You really don’t eat that when you are sick, right?” stuff:


One person got very specific and said that for migraines she must have McDonald’s French fries, McDonald’s Coke and a Red Bull.
One has a daughter that insists on watching The Grinch Who Stole Christmas.
Many said they just wanted their moms, which I loved. A cool rag on my head, even when I didn't necessarily need it, was more powerful than Tylenol.
If you haven't already chimed in, what do YOU want?
Email Post