Why I Got Super Embarrassed At The State Fair of Texas (and a giveaway of 2 State Fair tickets, a Chevy paracord and an iPhone charger!) 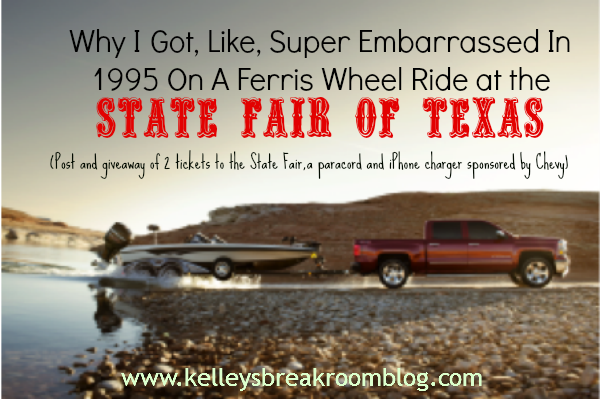 Good Sunday afternoon, my friends.
After a quick Friday afternoon poll revealed that many of you DO live in the Dallas area and would be interested in tickets to the State Fair of Texas, I received approval to give two tickets to the State Fair away to one of you, plus a Chevy paracord and a phone charger. I'm excited about that, because it seems like there were quite a few that would like those tickets. I wish that I could give all of you the tickets!

You know what else I wish?
I wish that I could go to the State Fair. I have been a handful of times when I was a student at The University of Texas at Austin. The Texas-OU game was always a big weekend at the fair. I have both good memories and not-so-good memories of that fair. My not-so-good memory went a little something like this...
Him (my boyfriend of less than a year): This Ferris wheel ride is pretty awesome, right?
Me: Yeah, it's so pretty up here, right? A little scary but pretty!
Him: I love you.
Me (sweating due to exponential increase in heart rate): What? You do?
Him: Hold on...what did you think I just said?
Me: What?
Him: Did you...I said look above you.
Me: Oh. Yeah. I know. Wow. Look at that sky. *fights back tears*
Okay, I may not have gotten that conversation exactly right but the bottom line is the same: I thought he said he loved me, he didn't say he love me, he knew I thought he said that he loved me, he still didn't say he loved me and I was embarrassed beyond belief.
Soooo....
That's what I think of when I think of the State Fair.
(It turns out that boyfriend is now my husband, so I guess it all worked out. Seriously, though, I wanted to dangle myself from underneath that swaying Ferris wheel car more than I wanted to stay inside it at that exact moment.)
Other memories of the State Fair involve UT losing against OU. We lost a few times to them during those 90s games. My 8-year-old plays football right now. Two of his coaches played for OU during the time we were going to the games. They give him a hard time for wearing burnt orange socks to practice. They tease and say they'll make him run laps if he doesn't wear red. My 8-year-old is actually afraid to wear the burnt orange socks now. I usually make him. I'll show those suckers.
The State Fair is lots of fun, no doubt. Lots of good food, attractions, animals and Big Tex. Who wouldn't want free tickets to that??

Thanks to Chevy, I am able to give one of you two tickets. They are the official sponsors of the State Fair in Dallas. (Check out the State Fair Of Texas, Sponsored By Chevy! ) Check out the new Silverado in this video below. I'm loving that song! Watching this commercial makes me want to go get in a Chevy Silverado, drive through the country, listen to some Wynona Judd and drink some iced tea. And pet cows. And roll the windows down.


If you are interested those 2 tickets to the State Fair, a paracord and an iPhone charger, enter using the Rafflecopter form below. I will pick the two winners on Thursday, so that if you win, you can go this weekend coming up. Does that sound like a plan?