The day I (sort of) met Adam Levine 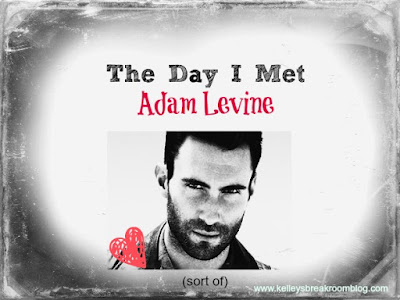 Already, my husband was a little frustrated with me. I had been working in the Houston Medical Center and he works downtown. We decided to meet near his office to eat lunch at Benihana. (And, no, I saw no women hibachi chefs and, yes, I'm still on the hunt for them.) Most parking spaces have meters, but usually you can pay for your parking space with a credit card.

I chose one that had to be paid with quarters.

I had no quarters.

It was pouring down rain.

"Before you meet me in the restaurant, can you run by the meter near my car and put some quarters in the machine?" I begged into his voicemail.

"Chris, it's me again. Will you please go by the car and put quarters in the meter?? I have, like, three more minutes before those vicious meter people come by to give me a ticket!!" I anxiously say into his voicemail. Again.

Minutes tick by and then, FINALLY, he walks into the door dripping with rain.

"Yes. I got your message. There are quarters in the machine. Why didn't you have any quarters?"

We continue to discuss this issue when I saw some very interesting people come into the restaurant behind him. That sat at the table directly beside us. The restaurant wasn't crowded at all, but they were seated right next to us. They just looked...famous.

"Those people are famous," I whisper to Chris.

"They're not famous. Why do you think they're famous?"

"They are! Everyone else in this place is wearing a suit, business clothes or scrubs and, look, that guy is wearing leather. There are three guys and one girl and one of the guys is wearing leather. That guy has a weird hairstyle. One of them has rolling luggage in that corner. See it! They're definitely in a band or something.  Hold on, hold on...I THINK THAT GUY IS ADAM LEVINE!!!"


(I have a thing for Adam Levine.)

"Shhhhhh, Kelley! That is not Adam Levine. I can't believe you think that is Adam Levine."

"The back of his head sort of looks like him!"

"Unless Maroon 5 is from Ireland, that isn't them. They're talking with accents."

I get out my iPhone and start looking up Maroon 5 so I can see what the other band members look like.

"Look at this guy, Chris. He looks like that guy beside Adam Levine!"

"And, Maroon 5 was JUST HERE performing! That could SO be them!"

So, I get up to go to the bathroom. I have to get a better look from another angle. It doesn't take long for me to realize that it's definitely not Adam Levine.

I still know they're famous.

"I still think they're famous."

"Well, they might be, but how will you ever know?"

My husband has to leave for a meeting.

As I wait for the check, my heart beats louder and louder. I am trying to work up the nerve to ask these famous-looking people if they're famous.

"I am so sorry to interrupt you, but, I just have to know... Are you guys in a band or something?"

They smile at me.

"What gave us away?"

"Well, there's the leather and the hat and the rolling luggage..."

"Which band do you think we're a part of?"

(I was still really hoping. I was thinking maybe Adam Levine looked different up close or something.)

"No, no...we're performing at Jones Hall tonight [a classy venue] and we're a part of Celtic Woman.  Have you heard of us?"

(There were three men and one woman, remember?)

"Oh, yes, I think so! [I was really stretching IT here. I'm pretty sure I've seen them on an infomercial or something.] You sing really beautifully!"

"I guess you are one of the Celtic Woman women?"

(We make a little more small talk and then I excuse myself. They were exceptionally nice and definitely sounded Irish.)

So, it wasn't Maroon 5, but for a fleeting moment, I thought I was sitting behind Adam Levine, which almost felt like the real thing.

I mean, don't you think this guy would look like him FROM BEHIND?

His name is Anthony Byrne and he is a Celtic Piper. He's one of the Celtic Woman pipers. From the back, I swear he looked like Adam Levine. His hair was cut really short and it was super dark. He had a little shadow going on, like he does in this picture. He was dressed in trendy clothes (no plaid skirts).

I also remember him being really nice and eating edamame.

So, since I thought he was Adam Levine almost the entire time I was at Benihana, and since the guy is in a band and is famous in his own celtic pipe playing way, isn't it like I almost met Adam Levine himself?

(You can't convince me otherwise.)