How To Improve Upon Awkward Hallway Conversations

We have all been guilty of starting or participating in dishonest small talk. Pick any public space where you see someone you kind of know and BAM! It's happening.  For the purposes of this post, let's make the workplace an example.  Let's say you are passing an acquaintance in the hall.  Perhaps it's the accountant with the frizzy hair that you have seen in the lobby waiting for the elevator about five times before and she has escaped from her Accounting hole on the 4th floor and is wandering around on YOUR floor, the 11th.  The two of you are the ONLY ones in the hall and you are going in one direction and she is going in the other.  The hall is long.  The hall has no escape routes, such as water fountains, bathrooms or holes in the sheetrock where you can hide. 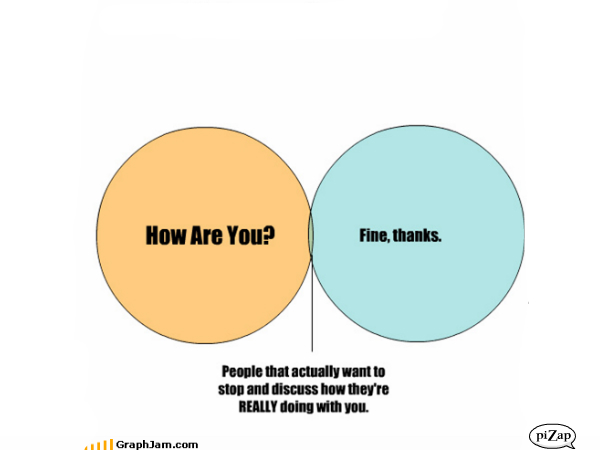 So, you muster up your best "How are you?", not sure if she will be the one to toss out the "How are you?" first (or maybe she'll just go with "Hi", you just never know), and mentally time when you will say it. Before you can even get to THAT point, you've got to time when you will provide eye contact. You can't be counting your footsteps like you are walking the plank on a pirate ship, lift your head up as she passes and blurt out "HOW ARE YOU!" like you are a freaky talking pigeon or something. It all has to appear very relaxed and sincere. And un-birdlike.

Which, of course, it's not.

You aren't REALLY intending for Frizzy-Haired Accountant to tell you how she is REALLY doing, because this conversation in the 10-second span you are given as you pass each other would be even MORE awkward:


"JUST TERRIBLE!  Oh, gahhhhhhhh.  I've got this huge bunion that makes me just want to DIE!  Also, have you seen my hair?  "

(You have now officially passed each other.)

But Frizzy-Haired has broken the unwritten rules and is still talking: "I won't!  This bunion!  This mop on my head! *Also, I'm bloated!"

*Any talk about being bloated immediately relieves you of any responsibility to act socially acceptable.  You now have permission to shoot rubber bands at Frizzy-Haired Accountant's back as she walks away.

That is why I am suggesting we just replace howareyoui'mfinethanks with something else.  Not even "hi".  Sometimes "hi" can sound a little flirty and you don't want to give Bill from Accounts Payable with the lop-sided toupee any ideas.  So, from now on, if you feel compelled to say anything at all to the person you pass in the hall in an effort to not appear like a vicious warthog, maybe just say...

They'll say the same thing back to you and life goes on.

Because, really, that is all we are saying.  We are just acknowledging the fact that the person we see passing us is not, in fact, a very tall potted plant.

I mean, "I see you" can get flirty, too, especially if you are incapable of having a decent conversation due to your utter depravity.  For most, though, it offers just the right amount of sincerity.
Other ideas:

*Play charades.  As you are getting closer, yell out, "WHAT AM I?" and fall on the floor writhing.  When they don't guess after 2 seconds, yell out, "I'm BACON, ya freak!  Ever seen bacon frying in a pan before??"

*Flash the peace sign.  They will be caught off guard and think you're a celebrity for a minute.  Accompany it by pronouncing it "pace" to really throw them off.

*Compliment something they're not wearing.  It is in the middle of the summer, so you should yell out, "NICE BOOTS!"  They'll think about how they aren't wearing boots and in that short time span, you'll already be gone.

Soooooo, what do you think?  You've got a better ideas, right?