Would you live in a cemetery?

﻿﻿﻿﻿ After eating out and seeing a movie last weekend (there's a story there for another time!), my husband and I began driving around the outskirts of downtown Houston looking at various places.  Recognizing that we were near the old Jefferson Davis Hospital, I asked him to drive by it again.  When our oldest son was 2-years-old in 2007, we accidentally came upon the old hospital and looked around the inside of it.  It was abandoned, but there was security guard on the property.  Although we were not previously aware, people had been flocking to this hospital for a very long time due to claims that it was haunted.  I don't want to entertain any of those stories here, but the place IS interesting.  Really, any old building with a historical marker on the outside of it is interesting to me.  It drives my husband crazy, but he always stops so I can read them.
﻿ ﻿

In 1840, just 4 years after Texas won its independence from Mexico and Houston was founded by the Allen brothers, 5 acres of land was bought on what is now known as Elder Street by the City of Houston along a couple of bayous that run near what is now downtown Houston.  A cemetery was opened and contained 4 sections for the poor, slaves (as slavery would not become outlawed until 1863), Confederate soldiers and people that died from suicide or in a duel.  In a duel.  Isn't that interesting?  You dueled?  You will be buried HERE!  It is estimated that approximately 10,000 graves are within those 5 acres.

The cemetery operated until the 1880s.  Today, there are only about 3 visible areas that you can tell were burial plots. There are no original markings on them at all. In 2007, a marker was made to honor a grave that had been discovered containing soldiers' remains.

From 1840 to 1880, there were many, many grand homes built in downtown Houston.  I saw many of them in a book I have about Houston history.  I wanted to take pictures of the pictures to put into this post, but then I was afraid I'd get thrown into the clanker with stale bread and mouse-nibbled cheese for the next 50 years of my life.  So, I thought I'd just let you know that most of those beautiful homes were razed to make way for an emerging downtown, which makes me sad, of course.  Those homes were majestic!  How could they just be demolished?  I know the answers, but I still hate that those houses were just punched right in the face.
The oldest occupied house is the Waldo Mansion, which was built in 1885 at Caroline & Rusk.  It was moved in 1905 where it sits now in the Westmoreland District, which for you Houstonians is near Montrose and 59.
﻿﻿

Here is a picture I took of another home in the Westmoreland District, which may have looked like some homes that were hit in the gut with a wrecking ball in downtown Houston.  Obviously, this house would cost a lot to repair.  Someone with lots of money, please restore this home before it gets knocked down and then invite me over and give me a tour and possibly give me the whole house for free. 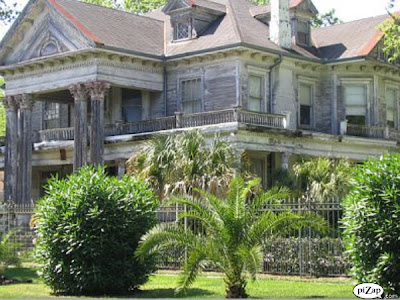 So, you get the idea of what Houston looked like in some parts in 1880.  During that year, operations shut down at that location as the official city cemetery and moved over to Allen Parkway.  From 1880 to 1924, the cemetery containing 10,000 gravesites on Elder Street became neglected and overgrown.
That's when Jefferson Davis Hospital was built ON TOP OF THAT same neglected, overgrown CEMETERY and named after the THOUSANDS of people buried underneath, some that were Confederate soliders.  The hospital only operated at that location for 13 years and then moved to an updated facility nearby.
﻿ ﻿ ﻿﻿From 1936 to 2007, this place was abandoned!  It just sat there getting dustier and dustier and and dustier and dustier and dustier and dustier, until artists moved into this building renamed "Elder Street Lofts".  People LIVE there now.  They live in a place that used to be a cemetery and a hospital.  Perhaps this is common in other parts of the country and world?  I have been out of the country, with the exception of Mexico, once and that was to Paris where the Catacombs are located.  Underground are thousands of bones of the deceased while the vibrant life of Paris goes on above.  Maybe building on top of cemeteries can't be avoided at some point?


﻿"We don't like thinking about dying and we don't like being dead and so we don't like taking care of cemeteries," says Mark Denton, an archaeologist with the Texas Historical Commission. "Our society has this out-of-sight, out-of-mind philosophy about the dead, and it's reflected in how many cities have built over and turned former cemeteries into something completely other than a cemetery." (from http://www.houstonpress.org/)

Do you think buildings should be placed knowingly on top of graves?  Do you know of other places with similar stories?  Would you live in this place?
Email Post