The Right & Wrong Times To Ask "When Is Your Baby Due?"

We've all done it. Probably. We've all assumed someone was pregnant, asked about it and were absolutely wrong. What can do you do then? There are no trapdoors in life. There's no way to suck yourself right out of the moment. You said it and you must own it.

That can be an ugly place to be.

You may have been on the receiving end of those words, too. When I was NEWLY pregnant, a woman at my former workplace said, "Kelley, I knew you was pregnant from behind." Mmmmhmmmm. She said that. She could tell from my big ol' behind that I was with child. She was right, but that behind didn't have anything to do with that baby. He was brand new! He was probably the size of a grape! Grapes don't cause you to have a rhino rear!

Knowing the heartache these questions can bring, my cousin and I developed some guidelines on this situation just this weekend. We don't want any unnecessary ugliness in a person's life. We're thinking that everyone could use a few tips and pointers on when to ask... 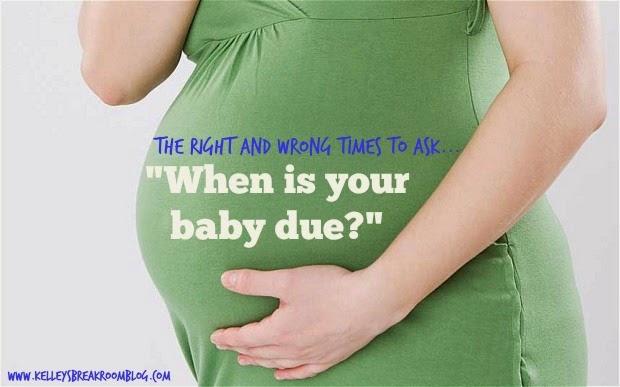 If the woman has a slight belly bulge, DON'T ASK. It may just be pizza.

If the woman says she's late on her cycle and she has a slight belly bulge, DON'T ASK. She maybe super bad at math and may have also just had some pizza.

If the woman has a bunch of other kids and you know she gets pregnant easily and has a definite roundness to her abdomen, DON'T ASK. It may just be the gift her baby left with her that was just born a month ago. If you were a better friend, you would have known that. You will not be giving her an additional gift by asking if she's pregnant. You actually need to go get her a gift card to Babies 'R Us and keep those questions to yourself. Sakes alive.

If the woman is holding her back like pregnant women do, DON'T ASK. Girlfriend may have had to move a lot of 12-packs of Diet Coke from her trunk to her pantry last night.

If the woman sort of waddles and is also holding her back like pregnant women mostly do, DON'T ASK. She may be part duck, part human. This may be the way she walks all the time. Who made you the official on walking patterns? Do not ask her when her baby is due and do not ask her to quack.

If the woman has an unmistakable pregnant lady belly, DON'T ASK. She may have had a whole watermelon for lunch. Do not tell her she looks like she swallowed a watermelon, either. She may find a watermelon and bust it over your head.

If, while you are talking to her, you see a definite imprint of a baby's foot poke out, DON'T ASK. It may not actually be a baby. That footprint may actually be a weird something she's got going on in her innards. Unless you have a trapdoor under your feet, you best keep that yapper zipped.

If she's wearing maternity clothes that you recognize from your own maternity clothes collection, DON'T ASK. She might like loose-fitting clothes, sister. If those loose-fitting clothes are actually tight-fitting, you really better not ask. (After my oldest son was born, my 82-year-old great aunt asked if she could have the maternity shirt I wore to my baby shower. I gave it to her. She'd probably have liked it if someone had asked her when her baby was due.)

If she said that she's having contractions, DON'T ASK. She may be an English teacher and she's talking about a contraction lesson that she's got coming up. You can't run the risk of being wrong.

If you are walking by a woman at Target that looks really, really pregnant and then something warm and liquidy spills out everywhere around her and then you slip in it, DON'T ASK. That might not have been her water that broke. She may just look like she's pregnant and she had to pee really bad. You can't risk being wrong. That could ruin her day. She may not want her bladder to receive any more attention. Just mop up the warm body fluid, make sure she's going some paper towels and keep shopping.

If you find yourself in an impromptu labor & delivery situation with a stranger at a grocery store and you see a baby's head crowning, DON'T ASK. I think it's pretty obvious that her baby is due right now. Go grab some paper towel packages and give it to her as a pillow. Maybe call 911.

So, you see, it's really pretty simple.

(Wait for her to tell you unless you are needed in the frozen food aisle with your forceps.)