The 6 things Norma Bates Has Taught Me About Raising Sons 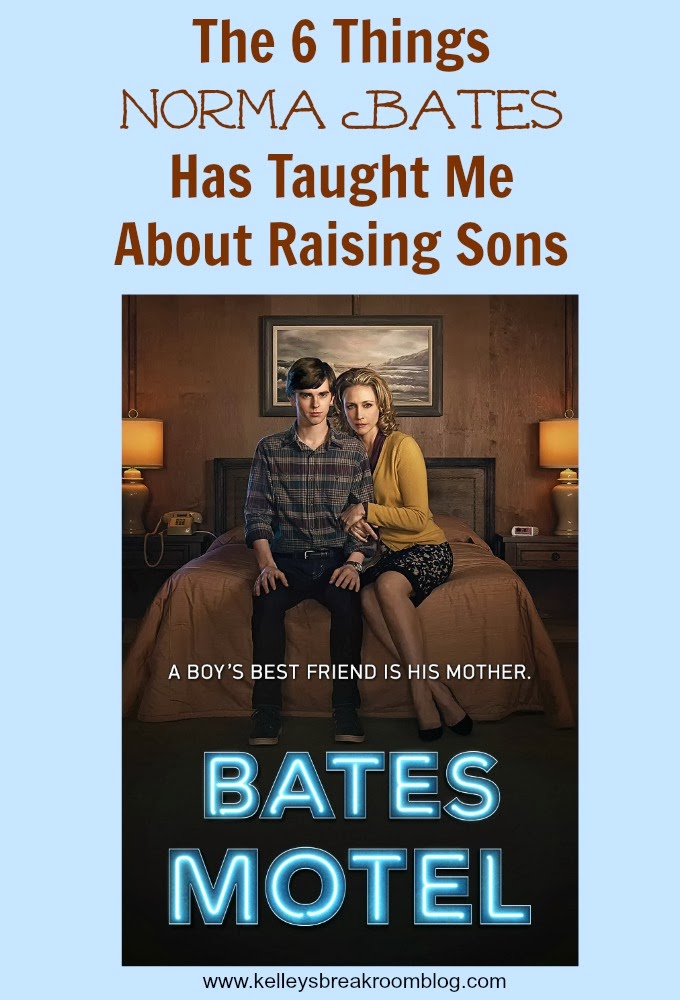 It's my sister's fault that I'm watching the show. I would have never started watching it if my sister hadn't said, "Are you watching Bates Motel? It is soooo GOOD." It's all her fault. All of it.


"Bates Motel" is a contemporary prequel to the genre-defining film "Psycho," and gives a portrayal of how Norman Bates' (Freddie Highmore) psyche unravels through his teenage years. Fans discover the dark, twisted backstory of Norman Bates and how deeply intricate his relationship with his mother, Norma (Vera Farmiga), truly is. - Written by A&E Television Networks

It really is a good show.

Well, let me backtrack a minute. I would never want my kids to see it, of course. It is a little scary and definitely an adult show, just like The Walking Dead. I'm watching that one, too. My 9-year-old asked me the other day if he could watch The Walking Dead because one of his friends at school watches the show. I told him that he couldn't watch it. I was never that concerned about what I watched affecting what he wanted to watch because I wasn't watching it when he was up. Now that he's older and can see the DVR list, I know that he will want to watch these shows himself one day possibly. Do I want him to watch Bates Motel? Do I want him to watch The Walking Dead?

Do you know what else makes me feel convicted?

If you have watched Bates Motel, you know about good ol' Norma Bates. If you are familiar with the Psycho movie, you know she's Norman's mother. Verma Farmiga plays Norma Bates in the show AND SHE IS GOOD. Seriously, she is a really good actress. She received an Academy Award nomination for her role in Up In The Air with George Clooney in 2009. I think I like watching Norma Bates most of all. The way that she interacts with them and the complexity of her moods and reactions just mesmerizes me.


Norma has two teenage sons- Norman and Dylan. Norman is definitely her favorite. She is also the most concerned for Norman given his tendency to have blackouts and his socially inept ways. Throughout the show, Norman is a really great, kind, normal guy. He is likable, even if he is a little odd, but then he breaks down. Norma is controlling, but sometimes you wonder if she is only that way because Norman has his issues. Which came first, though, you know? His issues or her issues?

The fact is that they both have issues.

So, I find myself really examining the way that Norma interacts with Norman and comparing it to the way I interact with my sons. There has to be a definite shift in the way that you treat your sons as they emerge from boyhood into their preteen years, into their teenage years and then as adults. Given that my oldest is 9 (my other one will be 6 next month), I feel that he is gradually shifting into his preteen years now. I know that I cannot pretend that he is still 6. Watching Norma has really heightened my awareness over how I treat my sons, and how I plan to treat my sons, as they get older, so, in that way, Bates Motel has provided a service for me. (I know I'm stretching it here!)


Here are the 6 things Norma Bates has taught me about raising sons:

1. You could remind your sons about how they were as little boys a bit too much. There is nothing wrong with reminiscing. Norma just does it a lot and she talks to him in a baby voice. She doesn't want to let go of him as a little boy, because she could keep up with him much better. She had more control of his life. He was still innocent in many ways. I can see that she is afraid of what he will do as he matures, so she clings to what she knows he was like when he was little.

2. Sons need SPACE. Norma wants to be together all the time. Norma wants this because she is afraid of what Norman will do when he is away from her. That is what makes the show so interesting. You can sympathize with Norma on that one. I feel myself thinking, "Norma, get a grip!" and "Norma, I'm so sorry. I would probably want to do the same thing!" In the most recent show, she expressed that she wants to keep Norman close. He pointed out that they live in the same house, eat meals together and sleep in rooms right next door to each other. "Isn't that enough?", he cried out to her.

3. Hand holding needs to taper off. I know that we may have to hold her older sons' hands at times for different reasons. Some people may have to care for an older son, so hand holding is necessary. The large majority of mothers, however, with teenage sons don't hold their sons' hands. She holds his sometimes. That is too close and too touchy-feely, right? People may see this one differently. I think about this with my sons. I still hang on tight to my 5-year-old's sometimes in a grocery store parking lot, for example, but my 9-year-old walks in front of us.

4. Persistency can be taken too far. During a recent show, Norma wanted Norman to audition for South Pacific with her for a local community production. She remembered how well he could sing as a boy. She wanted a fun, carefree outlet for them to enjoy together. Norman said he didn't want to do it many times. Norma kept smiling and reminding him how much fun it would be. She was chipper. She was encouraging. She was PERSISTENT. He finally folded. He always looks like he's on the verge of cracking when he finally folds. He suppresses his desire to do something different to make his mother happy.

5. Hurt feelings can be manipulative. Vera Farmiga that plays Norma Bates has gotten that "you hurt my feelings" look down. It's not a look that makes you feel satisfaction, either. You sort of feel sorry for her. She has it rough in White Pine Bay. She has had a rough life before they moved there. She just doesn't really have much else to fulfill her relationship needs besides her sons. She is good at manipulating them by getting her feelings hurt a lot, though I don't think she realizes she is being manipulative at all. That is the dangerous part.

6. Do kids/teenagers need to know everything?  Norma doesn't have anybody else in her life. She doesn't have any solid relationships with a significant other, friend or family member, besides Norman. She doesn't really talk to her other son, Dylan, in a close way. Norman bears the responsibility of being both her son and confidante, and that is a bit too much for him to bear.

By themselves, some of these things are not horrible that Norma does. She truly wants a good life for her sons in White Pine Bay. She wants Norman to "act normal" and get out of the dark basement where he enjoys taxidermy as a hobby. In one scene, she yells out that Norman is "always in the basement". The truth is that Norman is not always there. He likes to do other things, but she sees him as "always in the basement". I wonder if her view of him just drives him to want to go to the basement even more.

This is deep, right? I like to keep things light-hearted around here, but that Norma/Norman thing has been on my mind! I want to be a mother that can let her sons go, because I know that is what is best. They are still young and little now, but they grow so fast. The thought of them being gone from here and on their own makes me a bit sad, but I would never want that not to happen for them. I want to be mindful of that and not cling on to them where they feel suffocated, stilted and unnecessarily guilty. I love having sons and I don't want to be Norma-like with them.

This is what Verma Farmiga has said of her character: “Yeah, she’s insane as any mother goes insane sometimes. It’s a very typical portrayal of maternity and its function and dysfunction and its victories and defeats. She doesn’t always make the right decisions.”

She also said: “You could say these two still have an umbilical cord like wrapped around the two of them and for an audience to decide and take that journey to decide how close is too close."

What are your views on relationships between a mother and her son? Have you seen the show?
Email Post