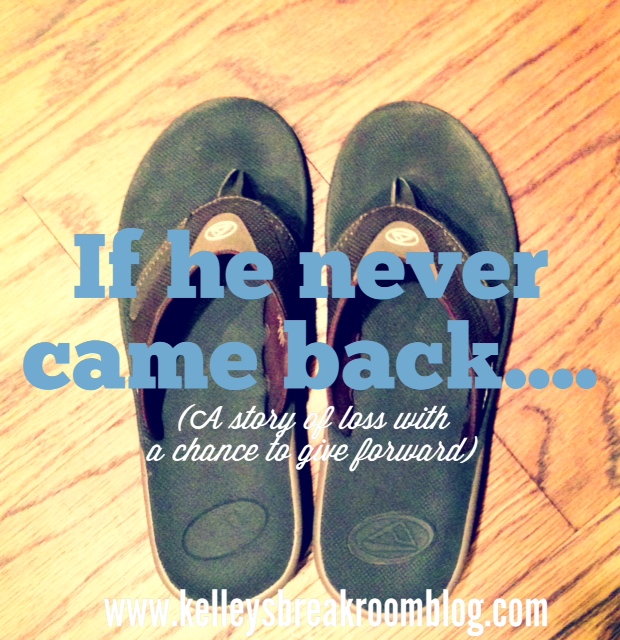 I stared at my husband's flip flops a little longer than usual this morning. I stared at them and then I put them on my feet. I walked around. I stood there. Squished my toes into the soles.

I was mesmerized for a while. Deep in thought. I wondered what I would do if I saw those flip flops on the floor and knew that he would never wear them again because he wasn't coming back.

What would I do if I knew that I'd never see him again?

I think I would have collapsed into a heap and cried until I fell asleep.

Right there in the hallway.

But, some people face this devastation because their husband has passed away.

Since I was a little girl, I was terrified of someone in my family dying. I think I've been to at least 20 funerals in my lifetime. At night, I'd pray for the longest time that angels would surround my house and protect all of us inside. I'd go through a long list and pray that everyone I knew would be healthy and safe and free from harm. I felt that if I left someone off the list, I would be contributing to their demise should it happen.

When the phone rings now at odd times during the day or night, I catch my breath. I pray that no one is on the other line saying someone I love has died in an accident or from a heart attack.

It's as if I want heaven on earth. No harm, no hurting, no pain, no tears, no sadness, no death.

We all want that.

Right now, a friend of mine named Courtney from the blog Our Small Moments is deep in grief. She, along with her two children, McCartney (8) and Anastasia (6), are dealing with the fact that the man they love so deeply is here no more.

The one that made them laugh. (Courtney said he was the class clown.)

The one that played them music.

The one that gave them hugs.

The one that made them feel better.

The one that Courtney met as a camp counselor.

The one that Courtney married in 2002.

His name was Scott.

And he passed away on Monday, August 12, 2013, after a brief battle with cancer.

We all want to do something for Courtney. We wish that we could turn back time, find that ugly cancer and throw it out on the street. The one thing that we know we can do is band together to help Courtney with the bills she is facing now, the future she is facing without him and the financial hardships that will happen as a result.

I so wish that Courtney was not the only one that I knew he faced such a terrible loss. I can think of four people immediately that have lost the loves of their lives to illness in the last couple of years, two of those from cancer. One of those who also has small children at home. It pains my heart like I know it pains yours.

Right now, if you feel led to help Courtney, you can visit the Give Forward website to give either financially or with your words. They will all be treasured by her.

Go here to give Courtney your support.
Email Post