Sooooo, I ran over FIVE ducks.

After Monday morning, I now divide my life into two parts:

So, it was a Monday morning and I was driving between 45 and 50 mph down a semi-busy four lane road with my 4-year-old in the backseat.  If you were stopped at this light, you would turn left and be close to where it all went down: 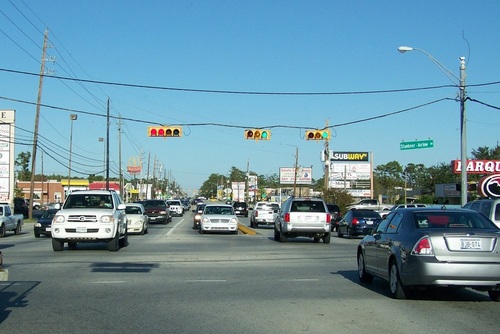 Okay, I didn't slam on my brakes fast enough...

AND I HIT FIVE DUCKS.

Here's what I saw about a millisecond before that awful moment in time, except there were two adult ducks and about twice as many ducklings:


Looking at that picture makes my heart break in TONS of pieces, y'all!!! Someone give me a Kleenex and I'm not kidding!

In very rapid pace, I saw a large duck flying toward my car at which point, I did this,

and he did this,

He flew UNDER my car. The impact of duck to SUV felt much like someone throwing a football at my front fender.

I quickly pull over into the median and I see the mother duck, I'm assuming, rushing over the median and into the other two lanes of traffic with her ducklings probably saying "Ohcrapohquackohcrapohquack". Meanwhile, the dad, the one who had just seen my oil pan, is kind of staggering around and looks much like a duck who has had too much to drink. (And, I'm sure we've all seen plenty of drunk ducks.)

(I'm not trying to make light of this because I don't think it is tragic. It helps me to cope.)

He finally straightens out his feathers, catches up with his family and they all disappear into the woods.

At that point, I only thought I had hit Dad Duck and that he survived, but I decided to go back to the scene of the crime immediately to double-check.

You know what I saw, right?

"OH, NO!!! I killed those baby ducks!", I said to my 4-year-old while I clutched my face in my hands and stared at staggering Dad Duck.

"I didn't mean to kill them. They just walked out in the road out of nowhere! I don't even see water ANYWHERE around here. Where were they going?"

"Are they going to be dead forever, Mom?"


Those ducklings had probably just learned to walk. They had probably talked about their vacation to the other side of the four-lane busy street for weeks and then, KERSPLAT, I came along.

So, feeling like a worthless human being, I finally arrive home all sad and mopey still answering my son's question about the ducks being dead forever ("and ever?") because he asked it over and over ("and ever and ever?") and saw this when I got out of the car: 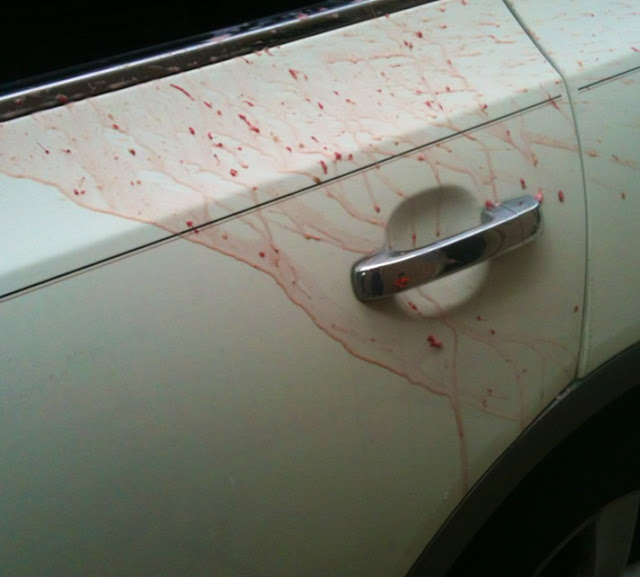 It took me a few seconds to put it together that that actually wasn't duck guts and was actually the strawberry smoothie my 4-year-old decided to dump out of the window while the car was in motion. ("I didn't want it anymore.") My heart took a few seconds to get the message.

It wasn't long afterwards that I took the car to get it washed. I'm still fearful that I will look down at my tire and see a tiny, tiny duckling feather.

And, since then, my life hasn't been the same.

I keep feeling the bump on the car from Dad Duck plummeting into it. I keep seeing the dead ducklings in my head. I keep remembering how the mother just kept scurrying across the busy street with her other ducklings. I wondered how long she thought about those four. Did she get safely across the street and then stare at them for a while to see if they would move? Was she sad? Or did she just keep running to their vacation spot? Did Dad Duck have an awful headache? Did he have access to Neosporin?

I can't even take a bike ride with my two boys without feeling like a very large duck trying to keep her two ducklings from getting hit by a car. It probably doesn't help that my favorite bike-riding outfit is a Donald Duck costume.

I just was awful on our bike ride today. I possibly overreacted a time or two.

"DID YOU SEE THAT CAR? IT WAS TWO MILES AWAY AND PARKED ON THE ROAD! IT COULD HAVE HIT YOU!"

My son can't stop thinking about it either.

"Mom, is those ducks still dead?"

"Mom, I saw a rabbit when I went bike riding with Daddy and no one had hit it yet. No one killed it with their car."

Earlier today I said, "I still can't believe I hit those ducks" as we drove away from dropping my oldest off at school. My 4-year-old then said, "You hit some more?"

(That last question actually made me laugh out loud.)

Like any normal American, I turned to Facebook for some support earlier today. I asked if anyone else had hit an animal before. Here is the tally from the nine people who said they had also hit an animal with their car. As you can see from the list, some people have hit more than one animal in their lifetime. Make that more than two. Or three. No, four.

Squirrels need to watch it.

My Facebook friends and family have been lots of help. My cousin's husband, Chris, sent me a Duck a l'Orange recipe. My cousin, Josh, answered the question, "How did you hit four ducks AT ONCE, Kelley?" questions with this answer: "She hit the first one, the second one looked back and said NOOOOO, splat...then the 3rd one looked back and said NOOOOOO, splat and so on." (He's a hunter. He's got tough skin when it comes to taking out ducks.)

HAVE YOU EVER HIT AN
ANIMAL WHILE DRIVING?