The Gay Awareness Meeting I Didn't Want To Attend (or reason #56,387 I need hearing aids)

One afternoon a girl I worked with approached me, "So, Kelley, did you hear about that district-wide Gay Awareness meeting we are supposed to go to next week?"
Apparently, I thought I was Miss Too-Important-For-Meetings given that I had graduated just weeks before.  Weeks.  "There is another meeting?  What is it about ?  Gay awareness?  There is really a whole afternoon dedicated to helping us be more aware?  I have so much paperwork to do.  You think they would notice if I skipped out?"

There were several more conversations of this nature for the week leading up to the meeting with different people at the copier, vending machine, hallway and while spraying graffiti all along the back of the building after school one day.

As I finally settled into my chair in the large room to be made more aware, I saw baggy tan Dickies and blue jeans go across the stage with kids dressed in red and blue bandanas and some in black leather jackets, kind of like Michael Jackson and his friends below.

The moderater then said, "Thank you all for coming here today for the GANG AWARENESS meeting..."

Not that I would have had time for that meeting either.  You know, because I  was so (not) important.

I needed hearing aids then (and I need them now).  For real.

Your hearing is perfect, isn't it?
You don't mistakes like this one, do you?  *sigh* 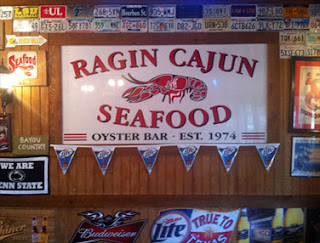 Maybe my hearing issue is one reason I like reading and writing so much.  If I had HEARD about today's deal only, I would probably say it was for a "Moose In the City", which would make absolutely no sense.  Today's deal is for $30 worth of food for $15 at the Ragin Cajun in Sugar Land.  They serve all the Louisiana favorites, like ﻿spicy crawfish, gumbo, etouffée, po-boys and jambalaya.  Kids eat free on Wednesday nights!  Act like you are in the French Quarter with me by getting your deal HERE.
Email Post