﻿﻿﻿﻿﻿﻿﻿﻿﻿ In the movie "Bridesmaids", Kristen Wiig's character drives a old, rusted, creaky car.  The car dies on her at the most inopportune times.  She also has to show her face in it in the most awkward of situations, such as when valet parking it (which is the worst!) or when accepting a fancy drink from a butler at a wedding shower.

I can relate.  In 1991, I turned 16 and got a car.  My grandmother's car.  It was a 1984 Cutlass Cierra.  Eventually something happened with this car and it was replaced with a newer model, my PARENT'S 1988 Cutlass Cierra.  In 1998, I bought my own car with my first "real" job post-college and we drove that for 250,000+ miles.  We just got rid of it last year.  In 2010, people!  I know the feeling of tight, difficult to turn steering wheels in my hands and check engine lights popping up so much I ignored them.  They just hated that, too.  They would really make me pay for it sometimes.  I would like to think those lights and rust "built my character", because...
If it weren't for my 1980's Cutlass, I would not...be able to relate as much to people barreling down the interstate in 95+ degree weather with their windows rolled down due to a broken air conditioner.  I know all too well the feeling of warm, humid outside air blasting my face practically right off as I dodge bugs and try to sing along to the radio.  "I know that there is pain, butcha hold on for one mor...EW!!  IS THAT A LOVEBUG?!?  Well, I don't love it!!!  No, hold on a second.  Mmmm...YUM."
If it weren't for my 1980's Cutlass, I would not...know who my true friends were or the friends who desperately needed rides home in high school (what other reason could there be??).  It was typical to have 6+ girls crammed inside that car.  If the car were to completely stop, it would shudder and die while I shuddered and died inside.  It was ugly.  So, I had to roll very slowly forward at green lights and pray the dadgum light would change to green already. Once in front of their houses, I'd slow my roll and the girls would have to jump OUT while the car was moving slowly forward. These girls were good! They had the jump out really, really fast without tripping. I never ran over anyone. Except Katie. And Sarah. Also Jennifer R. and Kim P. Nicole L. also bit the dust.  Oh, and Beverly. But, that's it! (Besides Julie M.)

If it weren't for my 1980's Cutlass, I would not...realize that my boyfriend would later become my husband despite becoming blinded by loose car liner falling on his head repeatedly causing him to eventually have to ride around everywhere with one hand stuck to the car's ceiling.  The car's hot ceiling.  *See first paragraph regarding no A/C*

﻿
﻿ If it weren't for my 1980's Cutlass, I would not...realize my husband can't read.  To this day, Chris, my husband, likes to laugh about my "Buick" to which I reply, "IT WAS NOT A BUICK! IT WAS A STANKIN'  CUTLASS CIERRA!!!!!!!!!!" and then rapidly pat down my hair and straighten my shirt. I have been waiting for Cutlass to cut less to their employees and cut me a check with the leftovers from my staunch defense of their company all these years, but I've seen nary a dime.

If it weren't for my 1980's Cutlass Cierra, I would not...have this Oldsmobile emblem fashioned into a necklace around my neck right now.  I love it and it loves me.  We've been through thick and thin.  Mostly thin.  Especially that car liner material.  It was really thin.  I eventually ripped it off and made a super cute shawl with it.  It went really well with some cool-lots I loved wearing around my college campus.  (Can you blame my husband for falling in love?) 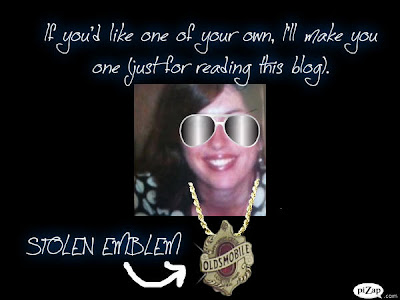 Has a car ever "built your character"??
Email Post